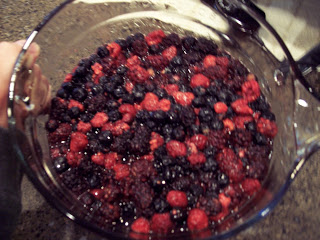 My mouth began to water just typing in the title.  This pie is GOOD.  I’ll just get right to it:

Directions:
In a bowl reconstitute the berries.

When the Berries are hydrated (it takes a few minutes), carefully strain them but reserve some of the water–about 1 cup.  *This is the Berry Water.  Set aside 1 and 1/2 cups of Berries.  Put the remaining Berries, 3/4 cup Berry Water, Sugar, Lemon Juice and Cinnamon in a saucepan. Stir to combine.  Bring mixture to a boil then reduce heat and simmer for 5 minutes.  In a separate bowl combine the Corn Starch and 3 Tbsp Berry Water.  Once mixed, slowly pour/stir into the simmering berries.  Cook 1 minute longer stirring constantly.  ﻿

Allow the mixture to cool.  Otherwise when you pour it into your pie shell it’ll make the bottom crust get soggy.  Not good.  Once cooled, carefully fold in the remaining berries.  Pour filling into pie crust.  I had a hard time not eating the filling before it went into the crust.  I may have “accidentally” not scraped the pan as well as I should have so I could literally lick the pan clean while the pie was cooking.  No regrets, it was delicious 🙂 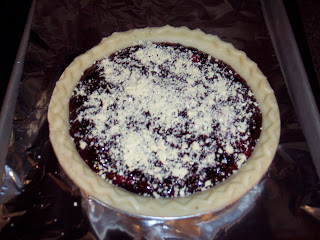 Okay the picture above shows some Powdered Butter that I had semi-hydrated and sprinkled on the top.  Do NOT do this step. Just pretend it’s not there.  The butter didn’t detract from the pie’s flavor it just didn’t melt into the pie.  The Powdered Butter has worked great in other baking recipes where I’ve mixed it with stuff but it doesn’t melt like typical butter does.  My husband had it with his French Toast tonight for dinner and really liked it but I’m getting off topic again…

Put the second pie crust over the filled pie.  Make sure you either do a lattice top or cut steam vents in the top crust.  I chose to cut strips of pie dough and make a lattice top.  Don’t be afraid of the lattice top it’s easy to make.  First cut about 1 and 1/2 inch strips of dough.  Lay strips in the same direction across the pie top but leave space in between each strip.  Fold back halfway every other pie strip.  Lay a pie dough strip going the opposite direction across the pie.

Fold back the pie strips–meaning return them to their original positions.  This creates a weave.  Repeat until lattice work is completed. 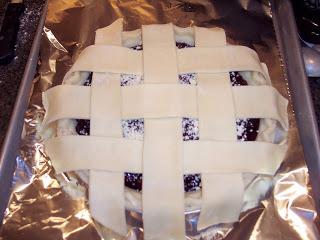 Pinch off the overhanging crust and press together bottom crust to top crust pieces.  Brush inner top crust (not edges) with milk for even browning in the oven.  (Thanks Marsha for the tip!) 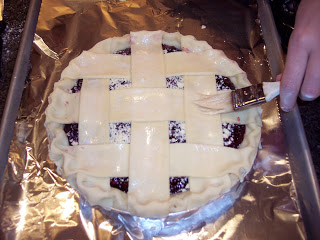 Place pie on a foil lined baking sheet and bake in a preheated oven at 350 degrees for 1 hour. 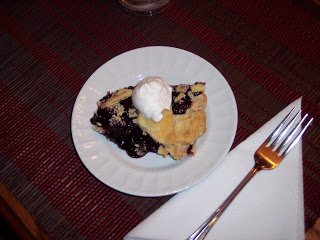 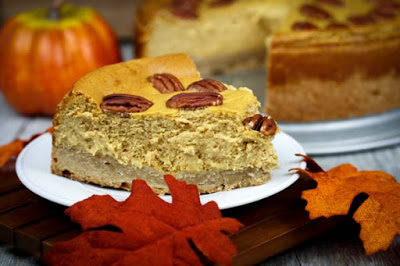 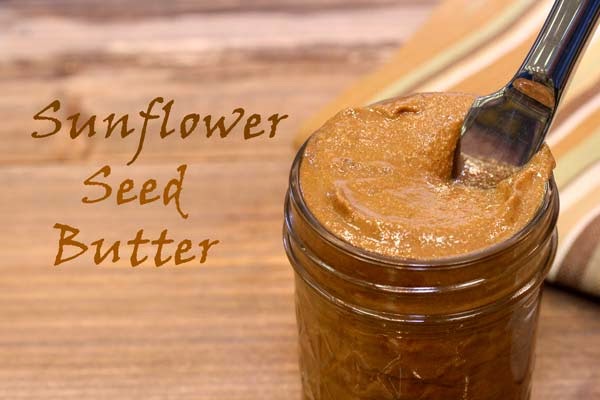 Honeyville Meals in a Jar Giveaway 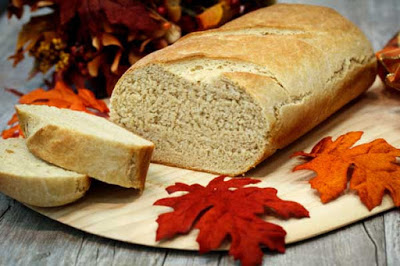