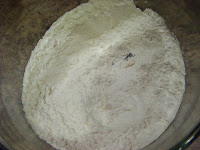 So last night I was DETERMINED to make a dinner 100% from my Food Storage. Chicken Enchiladas was the recipe. But it required me to make my own tortillas. No laughing, no judging….for many of you this task would have been simple, but you see I have never, ever made my own flour tortillas. My sweet hubby was sitting at the computer doing his homework and when he saw what I was doing he starting laughing (in a supportive kind of way) and jumped in to try and salvage help me with the project. Hubby lived in Mexico for 2 years and kept trying to pass along advice. So for a first time tortilla maker….I have to say they turned out okay, yes, I need practice, but they tasted great despite the looks. Remember, no judging when you see the pictures!

Combine the salt and flour in a bowl.  Add shortening.  Mix in water a tablespoon at a time until dough holds together (I for sure used more water, almost a full cup total).  Knead dough on a lightly (lightly is a KEY WORD…if you use too much flour, you won’t get real tortilla’s) floured board or surface adding flour as necessary to keep the dough from sticking until the dough is smooth and elastic–about 4 or 5 minutes.Divide dough into 6 pieces.  Roll out on surface into a circle about 8 inches in diameter.  Heat skillet, preferably cast iron, over medium heat for 4 to 5 minutes.  One at a time, cook the tortillas on the griddle until brown spots begin to appear, turn and cook the other side, total cooking time will be 4 to 5 minutes per tortilla.  Serve warm or cool. Store in plastic bag as you would store bought tortillas. (I used my griddle that we make pancakes on….just make the heat on HIGH!)

** Original recipe called for Lard, I wanted to use Honeyville’s Powdered Shortening. I mixed the Shortening in a separate bowl and then from that added the 2 TBS. I would say this step is unnecessary. Just put the powder in with the salt and flour and add a little bit more water. 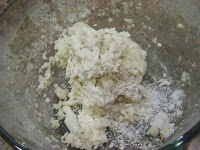 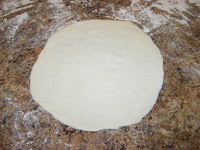 The flour you see in this picture is one of the times my hubby jumped up and stopped me….”Too much flour!!”  Surface needs to be VERY lightly floured and he was right….his tortillas turned out MUCH better than mine!
Step 2: Enchilada Filling
Now that the Tortilla’s were made it was time to get the Enchilada Filling ready. This was SUPER easy because all I did was open, pour water to re-hydrate, and then mix.
Recipe:
(all these measurements are before re-hydrating)
1-2 cups of Honeyville’s Freeze Dried Chicken (I did 1 1/2 cups)
1/3 cup water
2/3 cup Honeyville’s Powdered Sour Cream
1/3 cup Honeyville’s Bell Peppers
2/3 cup Honeyville’s Freeze Dried Cheddar Cheese
2/3 cup Honeyville’s Freeze Dried Mozzarella Cheese
1 can Cream of Chicken Soup (I should have used Shirley J’s Universal Sauce)
(you can always add onions or green chili’s too)
-Re-hydrate Chicken, Bell Peppers, Cheddar & Mozzarella Cheese. Easy!
-Use half of cheese for mixture, set half of cheese aside for the top of Enchiladas
-For Sour Cream: I followed the instructions on the can; 2/3 cup of Powdered Sour Cream and 2/3 cup of Water: mixed together. The mixture was a little on the watery side, but since I was baking with it and adding other ingredients I went ahead and used it. 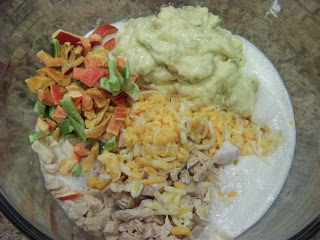 Mix your ingredients together, then fill your Homemade Tortilla’s, lay them in a greased 9×13 pan, put remaining mixture on top, then sprinkle the other half of shredded cheese on top, and bake for 15 mins at 350 degrees. 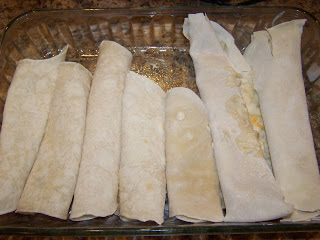 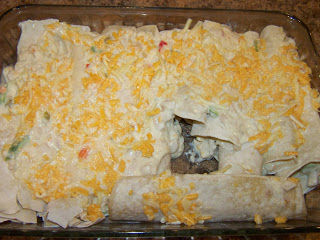 Remember, no laughing/judging my tortillas!
The Enchiladas actually turned out pretty good. No, really good! Hubby liked them last night and then took leftovers today and mentioned that they were really good. The best part: it’s 100% FOOD STORAGE!!!!
Enjoy! 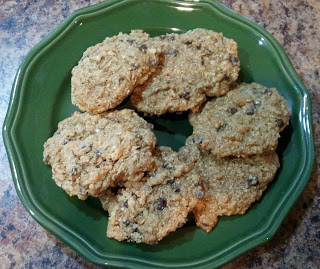 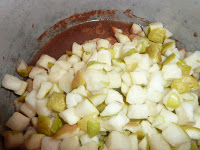 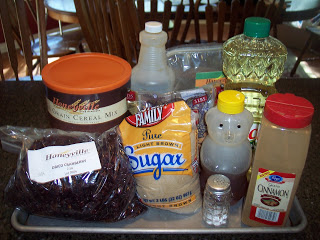